TALES FROM HAWTHORNE: AN ANTHOLOGY

HAWTHORNE /haw-thawrn/: A small town located in the Northeast of Scotland. It situates near the city of Aberdeen to the north, and borders the North Sea of the Atlantic Ocean. Its population is approximately 20000.

Waking up, he found out his entire body was immobilized. The space was unlighted, moist, stinky and claustrophobically strained. He couldn’t bend his back, he couldn’t stand up, he couldn’t even raise his feet, or spot his fingers. The sudden trapped feeling sent chill down his spine, and so he let out a noisy scream. He gasped for air frightfully, while gathering all the energy to crush the imperceptible raw shell wrapping around him, and it was unsuccessful. His index finger examined the seemingly cracked surface, a horizontal line crossing the lower part of the vertical one if he was being correct.

He knew where he was. Inside one of the old coffins in that webbed room.

Oxygen was expiring, and out of panic, he madly swung and thumped on the wooden lid. He ended the attempt after seconds of struggling. He was dreadfully scared, terror-stricken and shaking horribly. He shut his eyes, fearing to regard the color of devastation twisting the man, although the act would change nothing because it would be darkness and only darkness that he was forced to see.

Is this how Diane was cured? Using fear to subdue another fear?

He sniffed the stench of soil, the wooden box was resonating a little, and he inhaled in more of that soily scent. It was as if a burial ceremony was being conducted, and the coffin he was confined in was under the transition to the underworld.

Is this the only way for our reunion? In the afterlife?

“August, I don’t understand your choice. Why did you accept to be caught in this obvious trap? What are you thinking? Tell me…”

“Isn’t that your job? Reading people? You tell me…”

“I can’t, August darling, I can’t. It exceeds everything within my expertise, not to mention when it comes to my husband, the one I should have known fully to his core. You’ve never showed this side of yours before, and for the first time, there’s a singularity of your soul that my understanding hasn’t been able to lay hands on…”

“It’s death, it has to be death, Sara. There’s no other way for my reunion with Diane to happen if I can’t accept death.”

“Are you out of your mind, August!? I don’t know what’s going on but it’s too far now…”

“She’s gone, sweetie, she departed four years ago. Now that I realize I lost her the moment I walked out on her. She kept her word, that Cairstine child, she promised to take me to Diane and this coffin is where Diane took her last breath… A reunion, as she told me…”

“Why do our family have to end in such tragedy? August, you’re the last of us, you still have a chance to go on, help yourself a job, build another house, another family for your own. Death is not an answer to you, no, August, darling, no, you’re not giving up on yourself, on your life. Why don’t you have a little faith?”

“It’s death, it has to be death, Sara. There’s no other way for my reunion with Diane to happen if I can’t accept death.”

“When God took you away from me, Sara, he destroyed half of the faith I used to carry. Years later, he came for Diane, which marked the destruction of the other half. I mean specifically God, Sara, he’s the creator of destiny, I blame him for that, for the lost happiness of ours. Not the Cairstine girl…”

“She murdered our daughter, August, are you with me!? She killed Diane, she is a psychopathic killer. Can’t you see it August? Can’t you!?”

“What can I say, sweetheart? I saw the sign from her trauma, her cruel history. You see, sweetie, that Cairstine child was butchered by her own family, so the idea of love died along with her innocence, her yearning to be adored, to be loved and treasured. A lovely dream is just a lovely dream while reality is the graveyard of fantasies. Evan Cairstine, who knows that he was truly a cold-blooded beast under the camouflage manufactured by his humanitarian acts for Hawthorne? Human nature is impossible to understand thoroughly, and maybe what we’ve already known is just the tip of the iceberg… She transformed into a pathological serial murderer not because of her fault. It’s people did that to her, against her free will. She never wanted to end up like this. We can’t blame the fault on her. We can’t. We just need to sympathize with her endurance.”

Strain discharged from his tense muscles. He began to see the light in the dark, the light of redemption he was devoted to…

“Sara, you left me a duty, and I failed to do it right. May I call you Rosemary? Sara Rosemary Sylvester, as a husband, I disappointed you. My mind was carved with every single last word you whispered in my ear how I must treat our daughter before you went away in sheer distress. I became feeble after you’re gone, that’s why I imagine our conversations, in order to motivate myself to continue. I remain in your illusion day by day, to keep me on the track. How sarcastic I have turned into, the fatal flaw that led to Diane’s demise.”

“She will never look down on you, August, all you’ve done, she will never judge you. It’s not who you really are…”

“Oh, Sara… When you reach the end of your life, your entire history flashed across your eyes like a film reel, showing all the happy and sorrowful moments you once experienced. Diane was not my child in a way, I know that and I still care for her like she was my flesh and blood. She is the one true daughter I have, Sara, no one will match her importance to my life, even if I start a new family. I can’t do that, I long for one destination, I will live and die for it no matter what happens. It’s death that tears us apart, and it shall be death that brings us together again. The answer has been hidden in plain sight for such a long time…”

“The answer to what question, August? Can you tell?”

“Goodbye, my Sara. It’s time I rejoined you two in the immortality of the river of time…”

His lungs began to regain stability. All the loss, all the suffering, all the melancholy, they were parting ways with his heart. He was free from being held captive of his own cage, released from the torment and the solitude he brought to himself. He smiled, and laughed, in the tears of everlasting gratification. Suffocating for air, lips forging a chuckle, he embraced the fall.

Sara Rosemary Sylvester, my beacon of light, my pure sea of love

That I love you, my Sara and my Diane

Now we’re one with the river, we’re home…

On the ground, six feet above his resting place, in the center of a flaming inverted pentagram drawn inside a large circle by charcoal and salt, the Cairstine witch sang an ancient song of blood and tears, of nine circle of hells, of lost paradise and sins… Her dance synchronized with the raging blaze, her body caught fire and turned into the flame itself…

At the rear of the burning circle, the melting locket lost its copper shell, revealing a faded oval picture depicting a ginger-haired, blue-eyed girl, until the raging fire reached its surface…

Dust to dust, ashes to ashes. The sun rose once more…

Posted by Quỳnh Hương from Communications 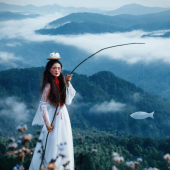